It’s astonishing how mobile technology has developed in recent years and how accessible it’s become to billions of people around the world. Before we get into the nitty gritty of what 4G/LTE is, let’s take a step back and understand that types of connections are available, what they mean to us. Which is best and what we should be aiming to connect on. The G in 4G stands for generation, because 4G is the 4th generation of mobile data technology as defined by the ITU (International Telecommunication Union). LTE stands for “Long Term Evolution” and applies more generally to the idea of improving wireless broadband to meet the increasing demand.3G wireless networks replaced the slower 2G networks which allowed for the most basic of what we would now call “smartphone functionality”.

4G connectivity standards were set out in March 2008 by the ITU, which requiring all services described as 4G to adhere to a set of speed and connection standards, of these ITU standards you can think of more like a set goal to be achieved by the technological consortiums (like the 3GPP). Mobile phones and devices need a sustained connection speeds of 100Mbps (10MB/s) to be called 4G. These speeds even by today’s standards are hard to achieve and as such the acronym LTE is used instead. LTE (Long Term Evolution) isn’t a technology, it is an acronym for the path followed to achieving 4G speeds. As such networks began advertising their connections as LTE / 4G ready, a marketing technique that allowed them to claim next generation connectivity without having to actually achieve the required speeds.

The main developing organization behind the actual technological standards, the 3GPP, is calling the specification developments within the LTE standard “Release” as it is under a constant ongoing progress. These may include implementations and details about new frequencies, modulation technologies and maximum data rates. To make things even more complicated, they categorize the hardware UE (user equipment; the other side is the base station) simply said by “what the device can do” within the specifications of the Releases, as they may contain several “Categories” (Cat.).

You may have also heard of LTE-A or LTE +, this takes us much closer to achieving proper 4G speeds and is much more stable than normal LTE. LTE-A (Advanced) uses MIMO (Multiple-In-Multiple-Out) technology, you may already have come across the term for WIFI technology, it is very complex but simplified, MIMO increases the overall transfer bitrate by combining data-streams from two or more antennas, with two antennas it means a hypothetical doubling in speed. There is also a new technology to bundle (aggregate) frequency channels to have a wider “virtual channel” which will also increase your possible bandwidth, it’s called Carrier Aggregation (CA).  Strictly speaking LTE-A Releases 8 and 9 are the first standards that really comply to the 4G ITU requirement.

MIMO: is one of the most crucial changes in LTE technology for bandwidth, but also probably one of the most important key features in term of speed improvement for Yachts as a lot of other features build up on it or benefit through it. The underlying principle is for the base stations (BS) to be able to send multiple data streams parallel from two or more antenna to on the UE on the downlink. 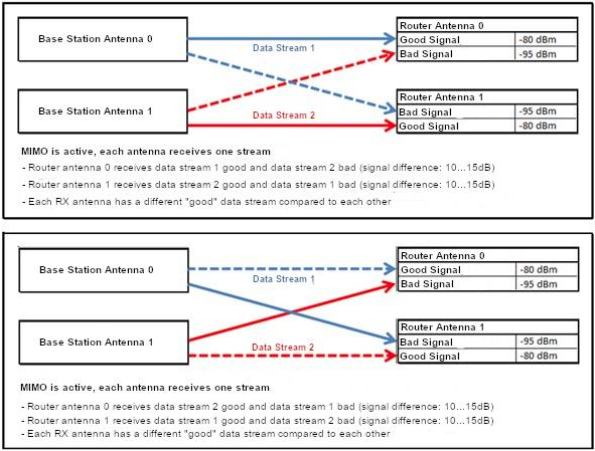 Being able to send multiple streams over the same physical time-frequency resource in the world of wireless data transmission means higher throughput as the very limited available resource frequency bands get used more efficiently – it’s like a one lane street gets extended to two lanes, meaning more cars can frequent the road at the same time. That is how data rates of 300 or more Mbit/s can be reached as hypothetical data rates double with each stream compared to one.

Signal difference / diversity, this is based on two separation concepts:

For a full MIMO performance, the streams need to be separated by at least 15dB but even 10dB will give you MIMO although only around factor 1,5. Separation through polarization is in this sense very effective as with a 90° x-pol signal as the polarity ensures a high signal separation on the “wrong polarized” antenna. It is because of the use of multiple antennas for the streams that the ideal signal will be chosen by the modem and this way increasing the range the more RX antennas are thoughtfully used in a MIMO construct. In more recent releases the BS will also use active beamforming capabilities, meaning the massive MIMO BS antenna array is able to send its signal beam more directed towards the UE direction, this way increasing the potential range again – but future demonstrations will show how good this will work in WWAN (WirelessWAN/mobile internet) world as the technology concept originates successfully from the very small cells of WIFI (802.11ac) and it will be mainly used for the new mmWave bands.

It crucial to know these facts as taking, “short cuts” through compensating with bad antennas, long coax cable runs, amplifiers, reducing antenna numbers through signal combiners / splitters for multiple modems will introduce more errors and performance loss. In these areas of dynamic, fine-tuned signal and frequency handling “overcompensation” is rather harmful.

The frequency spectrum between 700MHz and 3,7GHz is fairly densely crowded by multiple technology using it. Through the process of 4G development many unused old frequency bands were opened for it, unfortunately it left the LTE spectrum with many “bits and pieces” of rather narrow bandwidth within frequency bands for each carrier, sometimes as small as 5 or 10MHz. To increase the speed of 4G again, the usable bandwidth for the devices had to be more. This is done by Carrier Aggregation, like the name suggests it is “aggregating” smaller frequencies that are next to each other or even in a different band to a “virtual bandwidth” that now allows higher speed – it is like your modem could register twice into the network but with a different frequency or “channel”.

(Each aggregated carrier is referred to as a component carrier (CC)

5G: (5th Generation) connectivity is being tested with carriers, there is a lot of work to be done. There is much hype but no fully agreed upon standard as yet. There is a lot of confusion again with the naming similar to 4G, LTE and the fact in early stages it was more a “3.9G”. The ITU has specified the 5th Generation network in IMT2020, with the 3GPP consortium being the main developer of the standards to meet it, which they call “5G NR” (NewRadio) which together with LTE is their proposal for ITM2020.

5G will have three main scenarios of use:
Enhanced Mobile Broadband (eMBB), Ultra Reliable Low Latency Communications (URLLC), and Massive Machine Type Communications (mMTC), eMBB will be interesting for Yachting.
5G is rather confusing, there are some companies and carriers taking advantage of the lack of in-depth knowledge of the general public by marketing “5G Evolution”, “5G technology” or simply naming a device 5G. However, these pre-5G technology and networks are actually using existing improvements through the latest LTE Releases and Categories that are not exclusive to 5G but only incorporated by it through the existing LTE technology, thus they are misleading as any former LTE Release is the pathway to 5G as the naming of LTE (Long Term Evolution) suggests. There are only a handful UE devices released in 2019 being 5G NR NSA ready, mainly smartphones and only one router by Huawei itself as no PCI modem modules are released yet as most chips are still under development.
The current state of 5G NR Release 15 is finalized and making use of the Sub 6 GHz frequency ranges (FR1) of 5G NR first as it builds up on the latest LTE Releases, that is the reason for this stage of the 5G NR process is referred as “non-standalone” (5G NR NSA) as 5G-NR software is used on LTE hardware, this is pretty straight forward and currently being tested in congestion areas of major cities around the world. The next Release 16 of 5G NR will be standalone using 5G NR hardware and software with the new FR2 frequency ranges (above 6GHz).

5G NR FR1 will incorporate many new technology changes that are already to some extend existing in LTE Releases 13 and 14 but not enrolled or really practically usable until the networks are massively upgraded, like massive MIMO antennas on BS, Beamforming, more CA support, 256QAM, LTE-LAA (based on LTE-U) which is the usage of unlicensed 5GHz band used by 802.11a/ac (WIFI) and many more features.

The road map for 5G implementation.

5G NR FR2 will use the so called mmWave of the above 6GHz bands, which give a huge improvement on speed and latency as well as intelligent phase array antennas for a better and active beamforming.

5G NR limitations: 5G NR will deliver some impressive speeds especially while the yacht is within a few hundred meters of the cellular / small cell AP (Access Point) at the best, these 6GHz+ cells will have to be extremely small and frequent compared to former networks, which will limit for a foreseeable time only to densely crowded areas that are prime target for the carriers. The mmWaves will not penetrate solid objects as buildings, ships hull and weather like rain fade will make it will even more difficult for practicality in marinas and coastal areas. We’ve already seen from 802.11ac WIFI operations the 5GHz band is a “low range” band affected easily by solid objects and reflections (which also effects LTE-LAA of 5G).

Once a yacht ventures out to sea it will be out of 5+GHz range relatively quickly and will drop back to the lower frequency spectrum using LTE / 4G and 3G as its primary link back to the cellular tower. 4G / LTE / 3G has a useable range of 10 – 30 miles offshore (dependant on the height of the cellular tower / antennas above sea level and MIMO / Diversity).

As previously mentioned in the MIMO explanation antenna above, signal diversity and signal to noise ratio (SNR), will be critical for adequate speed in equipment past LTE Cat 3, equipment focusing on range extension rather than MIMO and CA functionality will most likely result in a higher range traded with a back to medium to low speed.

Another limitations is the actual state of network development, most coastal and rural areas out of “hotspots” like metropolitan areas are still developing their equipment up to the early LTE-Advanced standards or wait until the full state of 5G NR is finalized to be economically safe for deployment.
Realistically Release 9 and 10 with good Cat 6 or 9 UE will in many use cases already have the same real achievable, non-“hypothetical marketing” speed as the more expensive, less reliability proven latest developments as Cat 13 and beyond until the technology has passed its early days hardware bugs, but then 5G fully developed and enrolled will be already “around the corner”.

5G connectivity won’t be just a new modem module, even for 5G NR FR1 (sub 6GHz) the whole antenna concept has to be redesigned as the frequencies change, down from 450MHz up to 6 GHz even without the mmWave of FR2, which need new antenna types. The wiring may not be ideal anymore as the higher frequency are very sensible to low quality, poorly shielded cables and safety distances have to be reconsidered as WIFI APs, S-Band Radar and C-Band (Fleet Broadband) can potentially significantly interfere or damage the modems and vice versa. Not talking about internal BUS speeds, as most devices developed now never had to process data rates and encryption in those speeds if you use multiple SIMs (and modem modules).